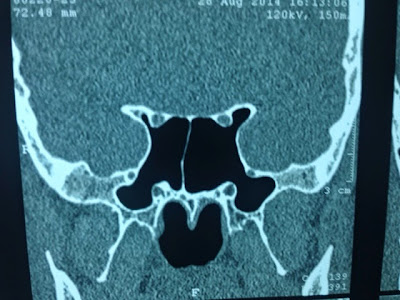 The sphenoid sinus is the most posterior, median and inferior paranasal cavity embedded within the skull base.

• Its pneumatization is variable :
• Conchal — 5%; Pre-sellar — 25%; Post-sellar — 70%
• its walls are irregular: more pneumatized is the sphenoid sinus, more irregular are its walls.
• The intersinus septum is sagittal but rarely median.
• Its ostium is in the sphenoethmoidal recess.
• The anterior wall is at 7 cm from the anterior nasal spine and the posterior wall at 9 cm. One of the best landmarks of the anterior wall of the sphenoid sinus is the posterior wall of the maxillary sinus.
• The angulation between the rostrum and the floor of the nasal cavity is about 30'.
• The surrounding vital structures are numerous:
• Superiorly are : the pituitary fossa, the optic chiasma, the planum sphenoklale. the olfactory pathways and the frontal lobe
• Laterally are the internal carotid artery, the optic nerve, the caroticooptic recess, the cavernous sinus with the cranial nerves (III, IV, V, VI) and VI and V2
• The sinus was neglected for a long period of time because of its deep location within the skull, the subtle presentation of the pathology and the difficulty to reach it before the advent of the endonasal microsurgery.
• Now we must admit that the pathology is extremely various: it has been depicted by the imaging (CT and MRI)
• Infectious diseases : • Bacterial: acute: non complicated and complicated • Fungal — non invasive (fungus ball — AFS) — invasive forms • Inflammatory diseases: • Chronic sinusitis • Fungus-like sinusitis • Tumor • Sphenochoanal polyp • Inverted papilloma • Carcinoma — primary or extended from the rhinopharynx of the ethmoid sinus • Postoperative diseases : sinusitis and mucoceles • Traumatic diseases — CSF leakage • From a surgical point of view, it is the nasal gateway to the skull base (sella and parasellar regions).

The transseptal approach: This is the oldest one, commonly used by the neurosurgeons in case of pituitary tumor surgery. It needs a hemitransfixiant or sublabial incision. Then there is the elevation of mucoperichondrial flaps. A resection of the perpendicular plate of the ethmoid is then performed, with further visualisation of the sphenoid rostrum. The anterior walls of the sphenoid sinuses are then perforated with an aspirator or a straight forceps. All the anterior walls and the intersinus septum should be resected with a bone rongeur. Relations between the intersinus septum and the lateral wall must be checked on the CT present in the OR. This is an excellent median and bilateral approach for the sphenoid sinuses, particularly recommended in case of disturbed anatomy, thick bony walls, unique sphenoid sinus and median pathology.

The posterior transseptal approach or paraseptal approach The concept is to give a view on both sphenoid sinuses. The incision of the mucosa is made 1 cm posterior to the bony-cartilaginous junction of the nasal septum; Mucoperichondrial flaps are then elevated upto the rostrum. The posterior septum is resected. Then the sphenoid sinuses are opened bilaterally as previously described. The advantages are to limit the dissection of the columella and the cartilagineous part of the septum. Therefore there is no risk of saddle nose, displacement or septal hematoma. The resection of the posterior septum gives some crusts for a couple of weeks but there is no risk of development of atrophic rhinitis, osteitis or empty nose syndrome.

The endonasal approach: This is a pure endoscopic route. After putting some cottonoids soaked with adrenalin, the middle turbinate is visualized and displaced laterally. Then identification and resection of the superior turbinate must be done. The ostium of the sphenoid sinus is in the sphenoethmoidal recess, along the tail of the superior turbinate, which is a relevant landmark. The perforation of the anterior wall of the sinus must be done superiorly. Then the resection of the anterior wall is done with a bone rongeur. Attention must be paid not to elevate the mucosa. This leads to the development of fibrosis with subsequent closure of the opening. The resection should not be too inferior because the septal branch of the sphenopalatine artery runs along the anterior wall of the sphenoid sinus. If it bleeds, cauterisation with a bipolar cautery must be done. The author does not routinely cut the middle turbinate or its tail when he opens the sphenoid sinus. This approach is the safest one as it is median and inferior, far from the lateral wall.

The transethmoid approach: This is a variant of the later. The surgery begins with a complete opening of the ethmoid air cells up to the Onodi cell. Attention must be paid to the possible relation between the posterior ethmoid air cell and the optic nerve. Direct injury of the optic nerve has been described during dissection in the Onodi cell when the dissection is too close to the lamina papyracea. When the ethmoid sinus is large, the sphenoid sinus can be opened with a curette going inferiorly and medially. It is like a stair: we must go down to penetrate into the sphenoid sinus. When clear landmarks are missing, the endonasal route is safer with identification and resection of the tail of the superior turbinate.


The transplerygoid approach: This approach is far less used. It provides wide access on the lateral portion of the sphenoid sinus. It is indicated for the repair of a sphenoidal meningoencephalocele, lateral to the foramen rotundum. A  middle antrostomy is performed. with visualization of the posterior wall of the maxillary sinus and the tail of the middle turbinate. The sphenopalatine artery coming from the sphenopalatine foramen must be identified and cut. The bone between the floor of the sphenoid sinus and the maxillary sinus must be drilled away. Inferiorly there is the pterygoid plate with the vidian canal. Sometimes the V2 can be identified. This approach is not easy to do as it exposes the content of the pterygopalatine fossa medially.
at August 25, 2014